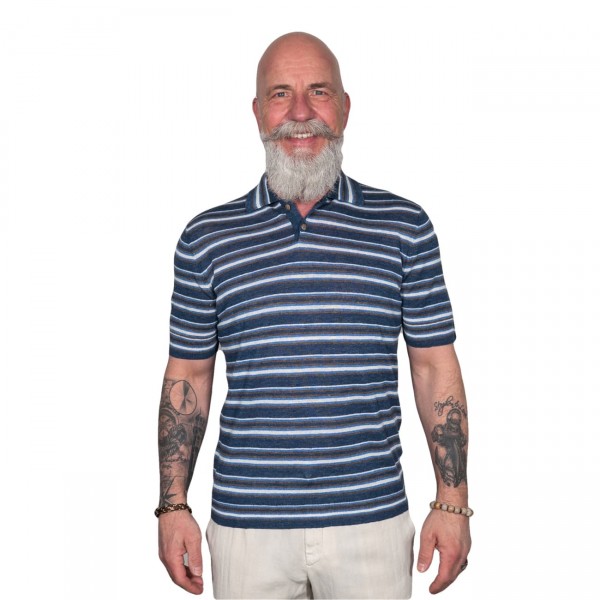 Description Information about the manufacturer
Description
Polo shirt from Altea with a striped pattern throughout and two-button collar. Made from a... more
Close menu
Product information "Altea Polo Shirt Linen-Silk"

Polo shirt from Altea with a striped pattern throughout and two-button collar. Made from a linen-silk blend, the polo is ideal for summertime.

Altea's roots lie deep in the elegance of late nineteenth century Milan, in the area between Via Verri and Via Montenapoleone, which later became one of the most important arteries in the geography of international fashion. Here, in 1892, a refined tie shop opened its doors for the first time and became a place frequented by the best clientele in the city. It was the creation of Giuseppe Sartori, a man of large vision, who gave his name to the shop. In the seventies a fourth generation took over the helm when Celeste's sons, Michele and Luca Sartori, decided to expand the company's production to include scarves and other accessories. In the nineties Altea firmly established itself as a brand with the "total look" for men and women.

Over the last ten years Altea has taken a particularly unusual path by building up its collections of clothes for men and women. The Milanese brand is historically the world leader in fashion accessories. From there, it has gradually built up a complete idea of the overall look. The distinctive features of the Altea brand are a strong passion for colours, the use of personalised fabrics, careful attention to detail and the reinterpretation of fashion codes for neckwear. The new Altea factory is the result of an ambitious project by the Sartori brothers, who decided to concentrate all their business activities in a single location. In an age of outsourcing, their decision to keep design, creation and production in one place went against this trend, as proof of a strong attachment to the company's tradition and as an assurance that Italian quality would be maintained.

The pilot elements that characterise the brand and have accompanied its growth over the years are not only the careful selection of quality textiles, but also the use of these original fifties designs and the elegant colour combinations that always succeed in achieving a refined and original result. Two elements that are at the centre of attention are design quality and attention to detail; each model is designed, structured, tested and perfected many times. The Altea product represents the meticulous, meticulous work that comes from a strong passion to achieve high quality, sophisticated results.