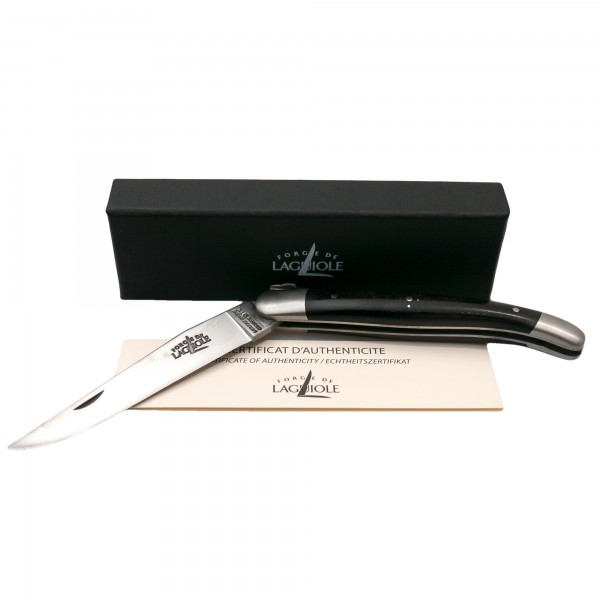 not in stock, Delivery time 5-9 Workdays

The Manufacture Forge de Laguiole was founded in 1987. It brought the production of the famous Laguiole knife back to its birthplace. The design of the building was entrusted to Philippe Starck, who perfectly implemented the company's philosophy: creativity with the great tradition of the Laguiole knife. Forge de Laguiole stands out for its authenticity, which is reflected in the high quality of its products. Each knife is handmade by a blacksmith and is not passed through several hands and machines as in industrial production.

In the past, knives had blades made of carbon steel (with a high cutting capacity, easy to sharpen, but susceptible to rusting), then of A440 (good cutting capacity, stainless, difficult to sharpen). Today the blades in the FORGE DE LAGUIOLE are forged from a new steel specially developed for the FORGE: T12. It combines cutting durability and hardness with easy sharpenability and high resistance to rust. These blades are individually forged and hardened.

Each spring is finely chiselled and then hardened. In the FORGE DE LAGUIOLE each knifemaker adjusts his Laguiole so that the blade does not strike the department.

There are many stories entwined around you. What is certain is that the knifemakers of earlier generations used many motifs to decorate the resorts: the scallops, vines, etc. The fly only became established later. The FORGE DE LAGUIOLE continues the old tradition and manufactures knives with traditional bees as well as with individual motifs.

The protective ends of a handle. Made of brass or stainless steel. With the FORGE DE LAGUIOLE they are always solid.

Originally from cattle bone. Then also from the horn of the cattle of the Aubrac, whereby one distinguishes qualitatively the lower tube and the massive point. The FORGE DE LAGUIOLE uses only the exclusive solid tip, because only this material is of special resistance and beauty. Equally important today are the different precious woods. Various modern materials such as leather, carbon fibre, composite fibre or aluminium are also used.

LAGUIOLE, a small village on the volcanic plateaus of the Aveyron/Aubrac in southern France, gave its name to a knife by which it is known throughout the world today: the "Laguiole" (one speaks it Lajoll!).
It all began in 1829 in the small town of Laguiole in the Aveyron, south of the Auvergne, when a young blacksmith named Pierre-Jean Calmels developed a knife that had never before been known in the history of cutlery.

The people of his region were cattle breeders and farmers. Their specialities are famous: the "Roquefort" from Millau, the "Laguiole" cheese from Laguiole, the cattle, whose excellent meat is considered a special delicacy throughout France, the sausages, which mature particularly delicately in the clear, dry air of the Aveyron. Excellent wines have always been produced in the Auvergne, and there was an important natural resource at that time: coal.

Many Auvergnatten were therefore "Routiers" (from "la route", the street), who travelled with their horse-drawn carts through France and sometimes came far to Spain. At the time, they had one thing in common with farmers and cattle breeders: they wore the "Capuchadou", the typical small dagger of the Aveyron, on their belt. One day, on their travels to Spain, they brought a knife with them that they liked and that they showed to their cutler: a NAVAJA. It was undoubtedly superior to the CAPUCHADOU because it was foldable and therefore easy to store in your trouser pocket. This knife was not as obstructive as a dagger dangling from a belt. Its blade was secured in the handle and thus protected against external damage just like its wearer in the event of a mishap.

Despite its functionality and elegance, however, the NAVAJA had the disadvantage that it had to be unlocked to be collapsed. It is thanks to Pierre-Jean Calmels' inventive talent that this knife can be equipped with its own department (the spring steel in the back), can be opened and closed without having to release a blockade. And so with the LAGUIOLE, for the first time a knife has a blade that is firmly fixed in use, which, when closed, rests securely in the handle and does not unfold. Both functions are handled by the department's principle invented by Calmels. The principle of the modern pocket knife was invented.

Beautiful, simple and useful...it quickly became an indispensable companion for everyone. The cattle and sheep breeders needed a thorn (to pierce the intestines of colic), the carters also needed it to repair the leather of their draught animals. So the smiths added it as the first accessory to the blade.

Another loving detail on the handle of many LAGUIOLES, which is typical for the people of this region, also comes from very old times: a cross inlaid with small metal nails in the handle shells. It is said to have served the shepherds who once stayed with their animals at night and pushed the knife into the ground to pray in front of their cross.

At the end of the 19th century, however, Aveyron began to impoverish. The great rural exodus began and people moved to the cities in search of work. Some left France and went out into the wide world. Often many did not have more of their homeland in their pockets than their LAGUIOLE. But wherever you met a person who had the same knife, you knew each other among friends. They helped each other, shared bread and cheese and so the term "passport auvergnat" was born. Others, who had moved to Paris, quickly managed to conquer the capital with their famous hospitality and Auvergne cuisine. And where you drink wine, you need a corkscrew. The blacksmiths added it to the knife.

So the LAGUIOLE soon became known throughout France and became a coveted object. But after this heyday, the production of the knife disappeared from Aubrac, orphaned by poverty. It shifted to the industrial region of Thiers, where it vegetated for many decades. But because the

term "Laguiole" was known throughout the world, one did not have to wait long for "Veritable Laguioles" from the Far East....... In Laguiole itself, however, the production of this small knife had by no means reached such a low level. On the contrary. The aim was to reintroduce knife production to Laguiole itself. Where it was once born. This was to take place under new auspices and together with the definition of quality criteria, in order to distinguish itself clearly from the products of inferior quality manufactured elsewhere.

In the mid-1980s a new generation of knifemakers, together with the municipality of Laguiole, founded the association "Le Couteau de Laguiole", thus laying the foundation for a new forge, FORGE DE LAGUIOLE (the forge of Laguiole).

Many people believe that the bee on the handle of a Laguiole guarantees its authenticity. That is unfortunately wrong. Charm and beauty of the bee do not guarantee anything, neither authenticity, nor origin, nor quality.
Many people believe that the LAGUIOLE writing on the blade guarantees authenticity....unfortunately this is also wrong. The name of the birthplace of our little knife is just as unprotectable as the motif of the bee (or fly).

The quality standards of the FORGE DE LAGUIOLE

The production of a Laguioles takes hours. Sometimes, in special cases, days. More than 40 steps are required for a Laguiole with only one blade. If a corkscrew or even a mandrel is added, there can be over 100 different operations. Every single one of them, executed accurately and carefully, determines the longevity and quality of the knife, as does the quality of the components.

From €150.00 *
This website uses cookies, which are necessary for the technical operation of the website and are always set. Other cookies, which increase the usability of this website, serve for direct advertising or simplify interaction with other websites and social networks, will only be used with your consent.
Accept all
Configure