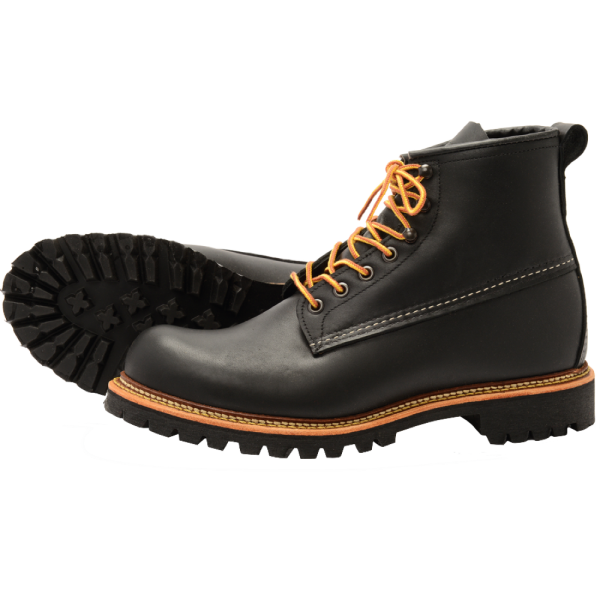 The Ice Cutter 2930 - an absolute novelty in the Red Wing Shoe collection. It is the first shoe with inner lining! The deep profiled Vibram sole, the natural wool red lining and the Black Otter Tail Leather, created the "Muster Work Boot" for the work of ice cutters in North America. The ideal shoe for the cold season.

More of "Red Wing Ice Cutter 2930"
About Red Wing Shoes
A small spot, in the bend of the Mississippi, is inhabited until 1857 by the Indian tribe... mehr
Menü schließen

A small spot, in the bend of the Mississippi, is inhabited until 1857 by the Indian tribe Lutasha. The Lutasha chief lends his name to the village: Red Wing. The young German, Charles Beckmann, worked in a tannery, but soon he was to create great things. Driven by his passion for craftsmanship with leather, he founded the Red Wing Shoe Company in 1905. His idea: hard-wearing, robust, durable boots for the workers of the up-and-coming industry of the 1930s. The number 650, the 16-inch shoe for trackmen, a high calfskin boot, was created and is still included in the product line today. Also the designs for the numbers 2268 and 915, the engineering boot and the boat for oil workers originate from this time. Quality proves itself. In the 1950s, the Irish Setter was introduced, a style that became an integral part of American workwear. And the legendary number 888, the 'Super Setter', unites the highest quality materials from all over the world: under leather from Australia, upper leather from Scotland, shoe flaps from England, shoelaces from Germany, Norwegian waterproof seams and Swiss soles. Anyone who has ever been to the Red Wing factory understands why these boots are not just boots, but a piece of the identity of their wearer. This shoe is made to stay - "built to fit, built to last". Because in the more than 200 stations at Red Wing, every movement is carried out with the greatest precision. The employees, who sew by hand after old school and check every centimeter of the leather from their own tannery, put so much passion into each individual boot that you can feel it when wearing it. Highest wearing comfort is guaranteed by an optimal fit. Red Wing has created a product through consistency and commitment to meet the needs of its customers that has evolved over 100 years from work shoes to the favourite footwear of many people around the world.

1. Remove superficial dirt with a damp cloth or brush.
2. We recommend Mink Oil for economical application & incorporation. The Red Wing shoe brush can be used for this purpose.
3. Leave your boots to stand for a few hours so that the care product can penetrate the leather.
4. to seal the leather we recommend the Leather Protector.
5. you are welcome to polish your shoes with the Red Wing polishing cloth.

Especially in the winter months it is recommended to take care of your shoes preventively to protect the leather from snow, dirt and road salt.