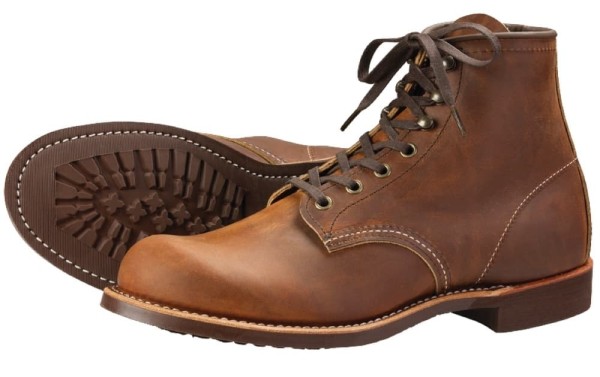 Red Wing Shoes successfully launched the Blacksmith collection in 2014. In 2016 this collection was further developed and the models are now manufactured with the Vibram 430 sole instead of the Nitrile Cork sole. The Vibram 430 sole has a tread pattern that gives the shoe significantly better grip in tricky terrain. Part of this series is the Red Wing 3343, (formerly 2959), which is equipped with the Premium Copper Rough & Tough leather from the company's own S.B. Foot tannery. This type of leather captivates with a very natural look, which is created by the reduced use of surface treatments. The classic bronze hardware adds the finishing touch to the Blacksmith look.
In the early 1900s, the Red Wing Shoe Company began supplying rural America with its shoes. Versatile and reliable, it was worn during work and then polished to a high gloss and kidnapped into nightlife. The Blacksmith can actually be described as the classic American work shoe.

A small spot, in the bend of the Mississippi, is inhabited by the Indian tribe Lutasha until 1857. The Lutasha chief gave his name to the village: Red Wing. The young German, Charles Beckmann, worked in a tannery, but soon he was to create great things. Driven by his passion for leather craftsmanship, he founded the Red Wing Shoe Company in 1905. His idea: hard-wearing, robust, durable boots for the workers of the emerging industry of the 1930s. The result was number 650, the 16-inch shoe for navvies, a tall calfskin boot that is still part of the product line today. The designs for numbers 2268 and 915, the engineer's boot and the oil worker's boot also date from this period. Quality proves itself. In the 1950s, the 'Irish Setter' was introduced as a style that became an integral part of American workwear. And the legendary number 888, the 'Super Setter', combines the highest quality fabrics from all over the world: underleather from Australia, uppers from Scotland, shoe flaps from England, laces from Germany, Norwegian waterproof edge stitching and Swiss soles. Anyone who has been to the Red Wing factory will understand why these boots are not just boots, but a piece of the wearer's identity. This boot is made to last - "built to fit, built to last". Because in the more than 200 stations at Red Wing, every move is made with the utmost precision. The employees, who sew by hand the old-fashioned way and check every inch of leather from their own tannery, put so much passion into every single boot that you can feel it when you wear them. Maximum wearing comfort is ensured by a perfect fit. Through consistency and a commitment to listening to what customers want, Red Wing has created a product that in 100 years has evolved from a worker's shoe to the favourite footwear of many people around the world.

€6.00 *
This website uses cookies, which are necessary for the technical operation of the website and are always set. Other cookies, which increase the usability of this website, serve for direct advertising or simplify interaction with other websites and social networks, will only be used with your consent.
Accept all
Configure