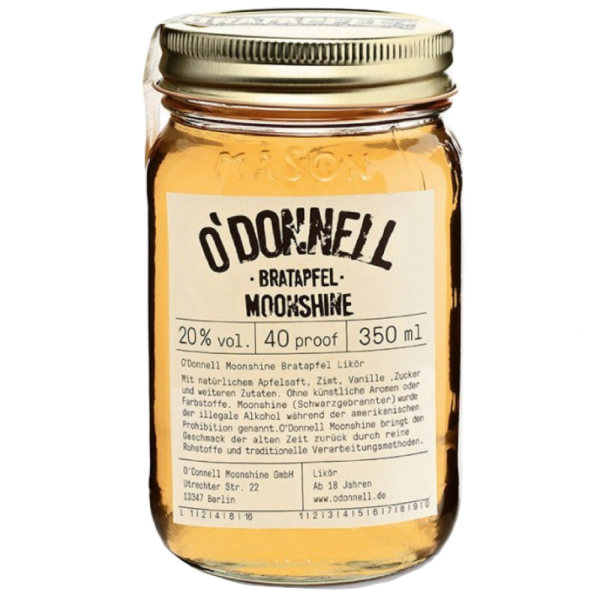 Fruity apple refined with sweet notes of almond, vanilla and cinnamon and other secret ingredients. Our baked apple becomes particularly full-bodied by the strong shot of lemon, which it receives shortly before bottling. All apples for our "baked apple" come from Europe and meet the highest quality standards. As the sweetest of our liqueurs, it enjoys particular popularity all year round. As we only use natural almond flavours, the baked apple does not contain any allergens that must be labelled.

Like all our liqueurs, we also produce our apple liqueur with only the best ingredients. All our creations are bottled in original American "Mason Jars", which we import directly from the USA. But of course also the "baked apple", like all our products, is produced according to old rules of craftsmanship and distillation in Germany. With its 20% vol. it is suitable for the creation of most different cocktails and Longdrinks. O'Donnell's recommends pure enjoyment, on ice or as a long drink with ginger beer. More recipes can be found on O'Donnell's recipe page.

More of "O'Donnell Moonshine Roasted Apple"
About O'Donnell
MOONSHINE Almost a hundred years ago, Prohibition (1919-1933) prevailed in the USA: the... mehr
Menü schließen

We have revived the disreputable drink of the past. Our O'Donnell Moonshine is handcrafted in Germany according to the old rules of the distilling art and made with natural ingredients. The original preserving jars "Mason Jars" come directly from the USA.
O'Donnell Moonshine is available in five varieties: besides the pure soft, barrel-matured grain brandy 'Original' (38% vol.) there are the liqueurs 'Bratapfel' (20% vol.) with natural apple.) with natural apple juice, cinnamon and vanilla, 'bitter rose' (25% vol.), a mixture of grapefruit, rose hip and black elderberry, the 'hard nut', with hearty hazelnut and sweet caramel note and 'high proof' (50% vol.).