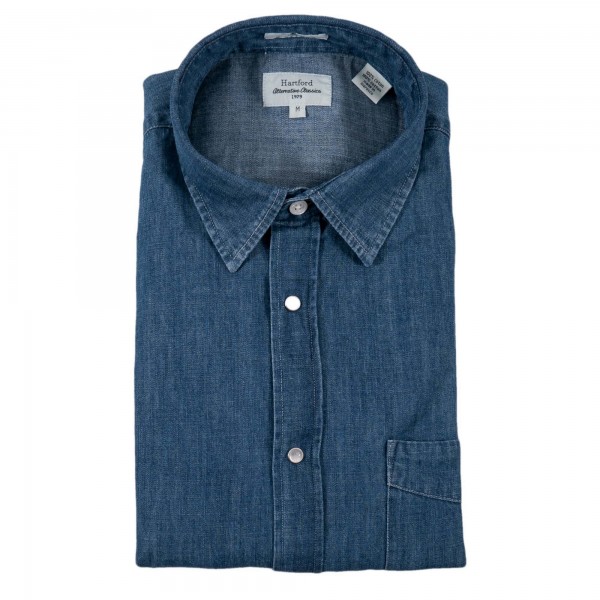 Classic denim shirt "Stormy" from the Hartford brand. Narrow cut, made of 100% cotton and triple stonewashed. This shirt was inspired by 'western' shirts with mother-of-pearl press-studs, breast pocket and visible button facing.

The Hartford project, which Yves Chareton launched in the United States in 1979, takes up the classics of American wardrobe and gives them a touch of modernity. The studio returned to Paris a few years later. The brand structured itself and began its commercial development: the collections grew in size and became synonymous with flawless materials and style.

€150.00 *
Original Vintage Style Overshirt Oslo
€239.95 *
Koike Shirt Barcelona
€119.95 *
Eton Casual Slim Textured Twill Hemd
€150.00 *
Pig & Hen Navarch 6 Navy
€79.95 *
Blaumann Shirt Dipdye
€259.95 *
Themata Belt Gohl
€129.95 *
Campomaggi Wallet
€120.00 *
This website uses cookies, which are necessary for the technical operation of the website and are always set. Other cookies, which increase the usability of this website, serve for direct advertising or simplify interaction with other websites and social networks, will only be used with your consent.
Configure Accept all