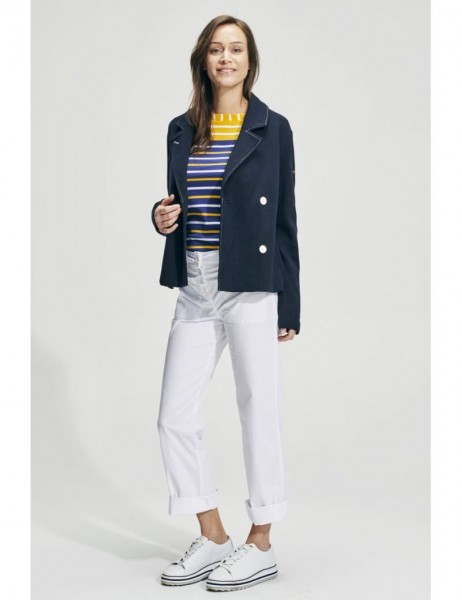 Trousers from ARMOR LUX for a sporty summer look.

At the end of the 1930s, a Swiss man founded a lingerie factory in Quimper under the name Armor lux - "armor" is the word for sea in the Breton language, and "lux" can only mean the light on the coast. Many of the garments that are still made in Brittany today also have a maritime character: The striped sailor's shirt is a signal beyond the borders of the region.

But the beginning of the venture was marked by a number of challenges: The outbreak of the war had put an end to the beginning right away, material shortages and rationing forced the company to shut down for a few years, but as early as the 1960s, the company decided to integrate an in-house dyeing plant into the operation in order to have all the processes of garment manufacture under one roof, from the production of the fabrics to quality control. In 1970 the first larger collections of Armor lux were launched, sailor shirts and lingerie were added to the market, along with other items of clothing - dresses, trousers and sweaters, also hats, caps and scarves, mostly in a maritime style. Today, uniforms are also part of the company's repertoire. French police officers and their colleagues from the post office are dressed at Armor lux in Quimper, as are employees of the Paris airports and the SNCF state railway, for example.