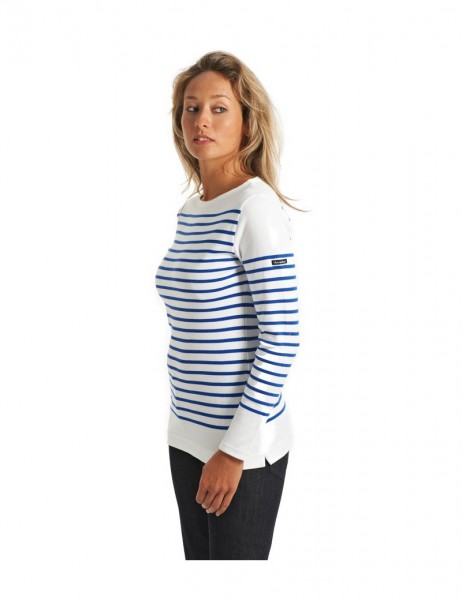 Description Information about the manufacturer
Description
In the past, sailor shirts were used to make it easier to spot seamen who had gone overboard.... more
Close menu
Product information "Armor Lux Matrosenshirt Amiral Damen"

In the past, sailor shirts were used to make it easier to spot seamen who had gone overboard. Today they have become timeless fashion items. This is THE original model of the Navy.
High closed sailor shirt with wide round neckline and long sleeves.
100 % combed interlock cotton.

At the end of the 1930s, a Swiss man founded a lingerie factory in Quimper under the name Armor lux - "armor" is the word for sea in the Breton language, and "lux" can only mean the light on the coast. Many of the garments that are still made in Brittany today also have a maritime character: The striped sailor's shirt is a signal beyond the borders of the region.

But the beginning of the venture was marked by a number of challenges: The outbreak of the war had put an end to the beginning right away, material shortages and rationing forced the company to shut down for a few years, but as early as the 1960s, the company decided to integrate an in-house dyeing plant into the operation in order to have all the processes of garment manufacture under one roof, from the production of the fabrics to quality control. In 1970 the first larger collections of Armor lux were launched, sailor shirts and lingerie were added to the market, along with other items of clothing - dresses, trousers and sweaters, also hats, caps and scarves, mostly in a maritime style. Today, uniforms are also part of the company's repertoire. French police officers and their colleagues from the post office are dressed at Armor lux in Quimper, as are employees of the Paris airports and the SNCF state railway, for example.

€260.00 *
Alessia Santi knit sweater brown metallic
€260.00 *
Wigens Newsboy Classic Cap Shetland Tweed
€100.00 *
Seldom women knitted sweater rice grain natural
€230.00 *
This website uses cookies, which are necessary for the technical operation of the website and are always set. Other cookies, which increase the usability of this website, serve for direct advertising or simplify interaction with other websites and social networks, will only be used with your consent.
Configure Accept all